The nerdosphere is in a minor tizzy over a putative bias in IMDb ratings for the new (2016) Ghostbusters film. It seems a bit odd to me, since IMDb ratings have always been horribly 'biased': If the question you are trying to answer is "If I am forced to watch this randomly selected movie, will I like it?", then IMDb ratings, and most aggregated movie ratings are difficult to interpret, very likely 'biased'. The typical mechanism by which a rating ends up on IMDb is that a person somehow gains an awareness of the film (this has been the major problem for studios since the end of the studio-theatre model seventy years ago), enough so to view the film; they are then more likely to rate the movie if they liked it, or liked it more than expected it, or really hated it. Those who had low to middling opinions of the film are less likely to rate it, and so you have the problem of missing data, without the simplifying assumption of "missing at random."

The Ghostbusters argy bargy (or one of them) is that reviews are suspected to be coming from people who have not seen the movie. This is possibly a problem for all reviews on IMDb, though less so for reviews appearing in streaming services, who know when you have seen a film. (The other argy bargy is that sexist and racist jerks have been harassing stars of the new film.) The analysis on five thirty eight is informative, but uses information (e.g. age and sex of the reviewers) that is not widely available, and which is volunteered by the reviewers. Given the IMDb mirror at my disposal, I can look for systematic biases for films based on sex, and will do so here.

I recently looked at IMDb ratings by actor age to see if the 'De Niro effect' was idiosyncratic, or whether reviewers systematically disliked films with older actors. The analysis there was a bit wonky, since I attempted to fit a fixed effect for every actor, but ratings are quoted for films not a particular actor's part in a film, but then multiple actors might participate in a given film, so they were randomly sampled to a single actor per film. Here I take a different approach, computing the (weighted) average age and sex of actors in a film. The weighting is based on the nr_order of actors within a film, the ordering given in IMDb which tells you roughly which actor or actress has top billing in a film. I exponentially down-weight based on this order, with the first listed actor/actress twice as important as the actor/actress in the fourth slot, who has twice the weight as number 7 and so on.

As before, remove films tagged with Documentary genre, keep those which have a production year between 1965 and 2015, and have listed English as a language. (You will find that Indian and Turkish movies have many fans on IMDb, often with uncomparable ratings.) You should be able to follow along with this analysis at home if you have the mirror. If you want to skip the data gathering part, you can get my cut of the data. 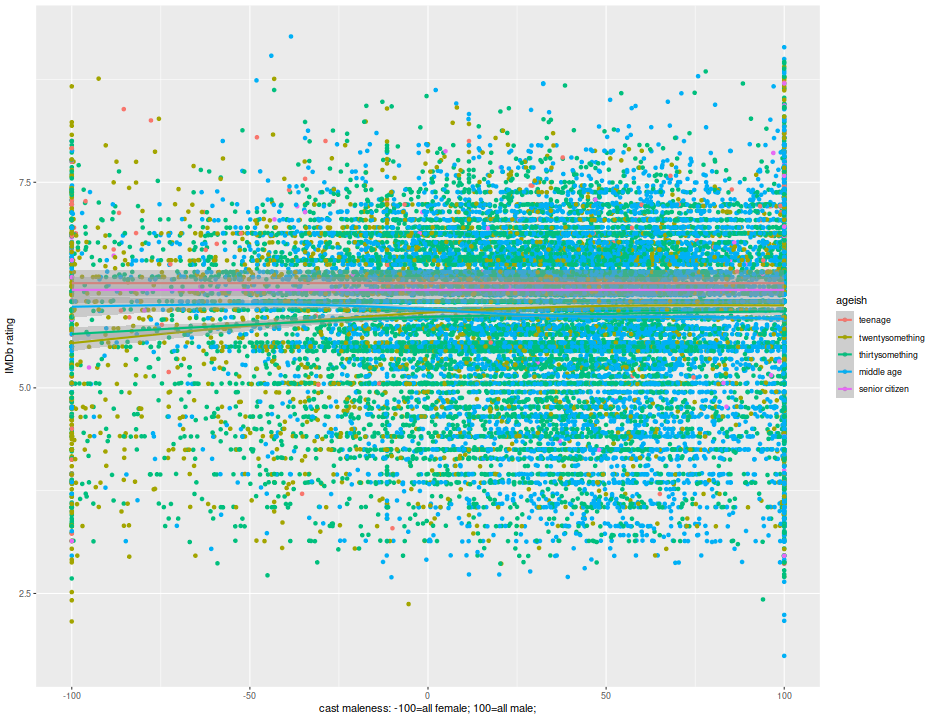 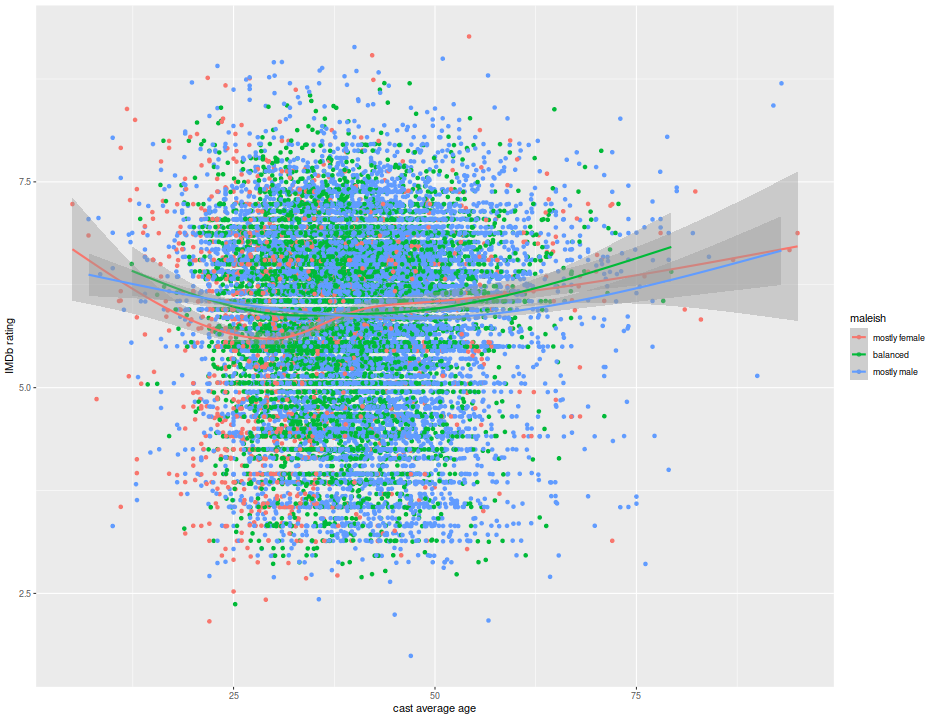 I do not see a huge effect here. The slight apparent increase in ratings for films with very young or very old cast members is likely caused by the small sample sizes. A regression might tell us something about the effect sizes:

In all, we do not see here a significant 'sexist bias' in film ratings, where films with mostly female cast are consistently rated lower. This does not mean that some films are subject to sexist campaigns, nor does it mean that reviewer sex is independent of review. It merely suggests that among the many biases in IMDb reviews, rampant sexism is not a leading cause of error.