You Deserve Expensive Champagne ... If You Buy It.

I received some taster ratings from the champagne party we attended last week. I joined the raw ratings with the bottle information to create a single aggregated dataset. This is a 'non-normal' form, but simplest to distribute. Here is a taste:

Recall that the rules of the contest dictate that the average rating of each bottle was computed, then divided by 25 dollars more than the price (presumably for a 750ml bottle). Depending on whether the average ratings were compressed around the high end of the zero to ten scale, or around the low end, one would wager on either the cheapest bottles, or more moderately priced offerings. (Based on my previous analysis, I brought the Menage a Trois Prosecco, rated at 91 points, but available at Safeway for 10 dollars.) It is easy to compute the raw averages using dplyr:

The average ratings range between 3.6666667 and 6.75, so based on my previous analysis, one expects that the winner will be moderately priced, around 7 to 12 dollars in price. But something funny happened: the average ratings do not appear to be positively correlated with cost. Consider the Kendall \(\tau\) measure of correlation, which tests for the presence of a monotonic relationship between paired observations:

You can check for significance (only if you're a Frequentist) using the cor.test function. There are a number of issues around this, however:

Modulo these warnings, it is hard to see the negative \(\tau\) as evidence in favor of a positive relationship between perceived tastiness and price.

Since inter-rater reliability is likely to be a problem (I intentionally shifted my average rating downward to increase my own chances of winning, an attack possible in this experiment even under taster blinding), I also tried to normalize ratings for the rater's bias. So I subtract each rater's mean rating, then compute bottle averages. I would have computed a Z-score, but many of the raters tasted fewer than 10 champagnes, making the standard deviations unreliable. Under this adjusted average, the top bottles do not change much, but notice that the duplicated Gloria Ferrer Sonoma Brut bottles have closer adjusted ratings.

Kendall's \(\tau\) is now even more damning of a positive relationship between price and 'tastiness'. I will not show the results of cor.test, since the assumptions of that test are even more questionable.

Get Me an Expert!

Remember that my entire strategy for winning this contest was predicated on using the 'expert' ratings, publicly available, to predict ratings. Could I have missed this antipathy towards price? Let's check the Kendall \(\tau\) for the 'pro' ratings:

Let us stipulate that this value is significantly positive. There are two possible interpretations for this outcome, one of which seems like a total conspiracy theory:

I won't say which is the conspiracy theory. Let us, however, look at the pro ratings versus our taster ratings (the 'hoi polloi'), Z-scoring the ratings for both groups. There does seem to be a serious mismatch between these two functions of price: 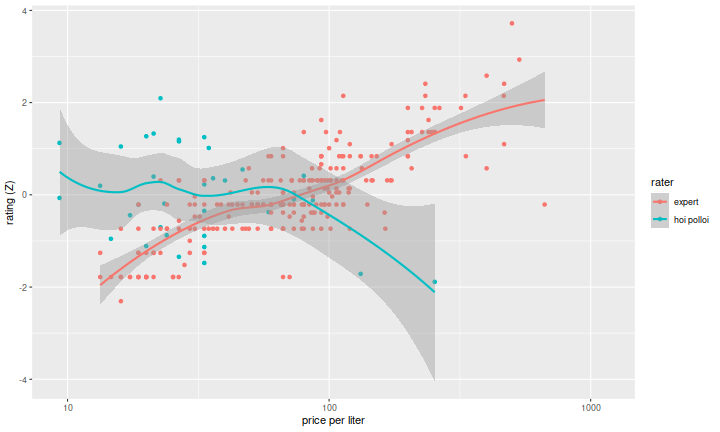 Computing the Kendall \(\tau\) on bottles which appear in both experiments would be enlightening, but there are actually very few in the intersection, due to mismatches in vintage and style, and also the mismatch in price points of the two groups. I think it should not be surprising that the cheapest sparkling wines scored relatively well among real tasters--a cheaper product should have broad appeal in order to make up for the presumably smaller margins.

If you are on the market for a bottle of Champagne, say to bring to a New Year's party, here are my suggestions based on the limited data available: