Spy vs Spy vs Wald Wolfowitz.

I turned my kids on to the great Spy vs Spy cartoon from Mad Magazine. This strip is pure gold for two young boys: Rube Goldberg plus explosions with not much dialog (one child is still too young to read). I became curious whether the one Spy had the upper hand, whether Prohias worked to keep the score 'even', and so on.

Not finding any data out there, I collected the data to the best of my ability from the Spy vs Spy Omnibus, which collects all 248 strips that appeared in Mad Magazine (plus two special issues). I think there are more strips out there by Prohias that appeared only in collected books, but have not collected them yet. I entered the data into a google spreadsheet, then converted into CSV, then into an R data package. Now you can play along at home.

On to the simplest form of my question: did Prohias alternate between Black and White Spy victories? or did he choose at random? Up until 1968 it was common for two strips to appear in one issue of Mad, with one victory per Spy. In some cases three strips appeared per issue, with the Grey Spy appearing in the third; the Black and White Spies always receive a comeuppance when she appears, and so the balance of power was maintained. After 1972, it seems that only a single strip appeared per issue, and we can examine the time series of victories.

Here I plot the 'net black score', the cumulative sum of White comeuppances minus those of Black. Note that when the Grey Spy appears (or in the rare cases where neither Spy seems to suffer, of which I found two), there is no net movement of the score. It seems that the Black Spy was the net loser, suffering most in the 1970's, with a comeback in the 1980's. 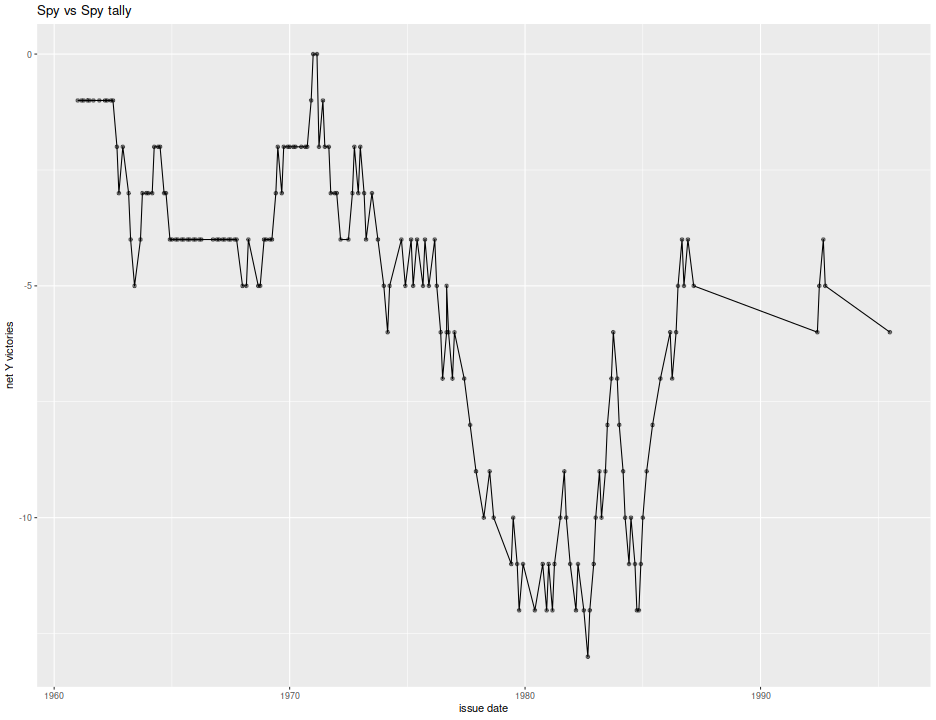 The Wald Wolfowitz test is a non-parametric test for the presence of serial correlation that is appropriate for binary series like this. The test is performed by computing the number of 'runs', which is to say the number of clusters of consecutive victories by one of the Spies. When the test statistic is too high (compared to what would be observed if the data were serially independent), then the data are too 'flippy', often reversing. This would be the case if Prohias tried to keep score balance by always reversing the previous outcome. If the test statistic is too low, the data are too 'sticky', with long periods of one Spy prevailing over the other. This could happen if Prohias got moody and picked favorites, perhaps.

The test is easy enough to run in R:

We get back a test statistic of 0.85, indicating slightly greater than random amount of reversal. However, this is not statistically significantly different than the expected value of 0, with a p-value of 0.39.

In conclusion, we have no evidence that Prohias kept running tally of Black and White Spy victories, and the data are consistent with the victor being chosen independently of the previous victories.

I still had some nagging thoughts after my recent examination of the distribution of Elo. In that blog post, I recognized that a higher probability of a draw would lead to tighter standard error around the true 'ability' of a player, as estimated by an Elo ranking. Without any data, I punted on what that probability should be. So I decided to look at some real data.

I started working in a risk role about a year ago. Compared to my previous gig, there is a much greater focus on discrete event modeling than on continuous outcomes. Logistic regression and survival analysis are the tools of the trade. However, financial risk modeling is more complex than the textbook presentation of these methods. As is chess. A loan holder might go bankrupt, stop paying, die, etc. Similarly, a chess player might win, lose or draw.

There are two main ways of approaching multiple outcome discrete models that leverage the simpler binary models: the competing hazards view, and the sequential hazards view. Briefly, risk under competing hazards would be like traversing the Fire Swamp: at any time, the spurting flames, the lightning sand or the rodents of unusual size might harm you. The risks all come at you at once. An example of a sequential hazard is undergoing surgery: you might die in surgery, and if you survive you might incur an infection and die of complications; the risks present themselves conditional on surviving other risks. (Both of these views are mostly just conveniences, and real risks are never so neatly defined.)

I have been thinking about Elo ratings recently, after analyzing my tactics ratings. I have a lot of questions about Elo: is it really predictive of performance? why don't we calibrate Elo to a quantitative strategy? can we really compare players across different eras? why not use an extended Kalman Filter instead of Elo? etc. One question I had which I consider here is, "what is the standard error of Elo?"

When the two play a game, both their scores are updated according to the outcome. Let \(z\) be the outcome of the match from the point of view of the first player. That is \(z=1\) if the first player wins, \(0\) if they lose, and \(1/2\) in the case of a draw. We update their Elo ratings by

Because we add and subtract the same update to both players' ratings, the difference between them gets twice that update, thus the \(2\).

I have become more interested in chess in the last year, though I'm still pretty much crap at it. Rather than play games, I am practicing tactics at chesstempo. Basically you are presented with a chess puzzle, which is selected based on your estimated tactical 'Elo' rating, and your rating (and the puzzle's) is adjusted based on whether you solve it correctly. (Without time limit for standard problems, though I believe one can also train in 'blitz' mode.) I decided to look at the data.

I have a few reasons for this exercise:

The bad and the ugly

Scraping my statistics into a CSV turned out to be fairly straightforward. The statistics page will look uninteresting if you are not a member. Even if you are, the data themselves are served via JavaScript, not in raw HTML. While this could in theory be solved via, say, phantomJS, I opted to work with the developer console in Chrome directly.

First go to your statistics page in Chrome. Then conjure the developer console by pressing <CTRL>-<SHIFT>-I. A frame should appear. Click on the 'Console' tab, then type in it: copy(document.body …